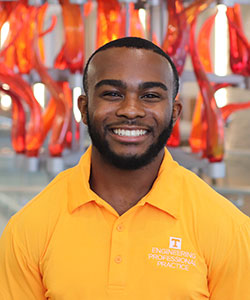 I worked for Southern Nuclear in Waynesboro, Georgia, for three rotations. There, I was a system engineer and a fire protection engineer. Southern Nuclear produces electricity for the southeast portion of the US.

I participated in co-op because I wanted to understand the type of work I would be performing in the real world and be able to conceptually understand how it tied to the work that I was doing in school.

I learned that your work defines you, but not as much as the lessons you learn and the relationships you foster along the way to achieving your goals. I believe that co-op helped me create a bridge between understanding how to develop professionally, within your company, and personally as you become older and stop your academic learning.

To someone considering participating in our program, I might say to them, “Be yourself, and don’t be afraid to take risks.”