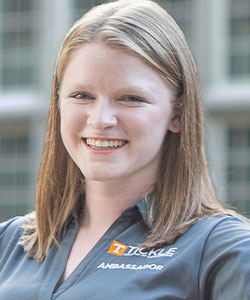 I did my co-op with Newport News Shipbuilding, a division of Huntington Ingalls Industry. They build US aircraft carriers and submarines. I have completed two rotations and currently on my third in Newport News, Virginia. The first was on the CVN 78 USS Gerald R. Ford and the last two are located on the CVN 79 USS John F. Kennedy. I work in the Nuclear Propulsion Test Group on a program called Propulsion Plant Monitoring and Control and Propulsion Plant Local Area Network.

I decided to co-op because I wanted to learn as much as I possibly could from a company. I wanted the extra responsibility and to have meaningful work. I did not want to make copies or be bored at work. This co-op has had me running around an aircraft carrier. I've learned about fiber connections, power connections, safety regulations, navy ranks, how to maneuver around the ship, and most importantly how to troubleshoot any piece of equipment. There is no way I could learn all this information in one summer.

Throughout the summer, I had been the secondary on a project for a local area network. I was able to observe and learn from an experienced electrical foreman. He taught me a bunch of different ways to troubleshoot and how to go above and beyond with your work. He was then pulled back to his foreman job and the primary position fell to me. They decided to make a co-op a primary because I have the most knowledge of the system. It quickly hit me that maybe I didn't pay enough attention when he spoke to colleagues or what tools he would carry around for troubleshooting. I learned to listen to and watch others closely because you never know when you will be the one in charge that someone will look up to for help.

This co-op has been real test engineering work. I am more prepared to work in this field because I am doing the same jobs as everyone else here. I do the paperwork, troubleshooting, hang and check electrical isolation tags, and had the independence to work something on my own. I came here to work, not just pass the time as I got paid. Academically, I am able to see a reactor and see how it actually works. This helps put all of my classes in perspective when I can actually see things like the pressurizer or rod position controls. I have even gotten closer to a reactor than most of my professors!

When considering co-op, I would tell students to look at all of their options. Some people do not want to extend their college stay, but is that because of money or time? Some student’s don’t know they can save money by doing a co-op and gain valuable work experience. Co-ops normally have less training than internships because you are not starting all over each summer, therefore it is easier to make meaningful relationships with coworkers, receive higher responsibilities, and you get a better feel for a company. Because of my opportunities, I know which part of the shipyard I would not enjoy working in, and where I would like to come back after I graduate.

When I am not working or studying, I like to hang out with my friends, make pancakes, watch TV, and exercise. I found an amazing kickboxing gym right by my apartment here in Newport News that I go to right after work. It is a great way to meet people outside work and school. I also take weekends to relax, have movie nights, or go hiking!