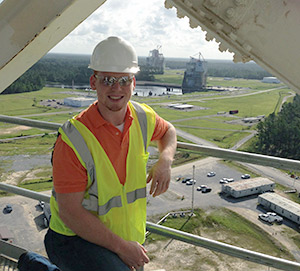 Our student this week is Jonathon Sill, an aerospace engineering major, who accepted a co-op at NASA/John F. Kennedy Located at Kennedy Space Center, Florida. He described the department he worked in and what his main responsibilities were.

“I worked in the Office of Safety & Mission Assurance,” he said. “Due to the time I spent on rotation, I was able to contribute to several projects that supported the NASA mission.”

One of his most in-depth projects was creating risk-based assessments (RBA’s) for the RS-25 engines (formerly known as SSME’s).

“My role was to establish a history of the engines; i.e. determine the time each engine had spent undergoing hot-fire testing or in flight,” said Sill. “I analyzed what (if anything) had gone wrong at each joint and what corrective action was taken afterward. This data helped us then evaluate the risk by weighing the likelihood of the event to happen vs. the severity of the event (should it occur). From there, we were able to assign the risk to the flight hardware and complete the RBA.”

Another project he was able to work on was determining the “Maximum Credible Event” (MCE) for SSC facilities.

“The goal of this project was to assume the worst-case scenario for a facility and determining the qualitative distance(s) (QD) or the distance away from the facility an individual may be and be affected by the results of an explosion,” he said. “In one scenario, it was our job to determine the QD’s for the MCE of the A1 Test Stand. We assumed that a cataclysmic event had occurred (a meteor struck the test stand and caused all of the fuel & oxidizer to simultaneously combust) and calculated the radial distance from the test stand that would be affected. This information helped us determine what PPE and safety measures would need to be taken for certain areas surrounding such facilities.”

“I was also a part of the J-2X Test Team, supporting each hot-fire test, and I am currently a part of the RS-25 Test Team which will begin testing mid- August,” he said.

Sill found valuable benefits during his co-op assignment in reading technical drawings, becoming more advanced in MATLAB and Pro/E, and learning to problem-solve.