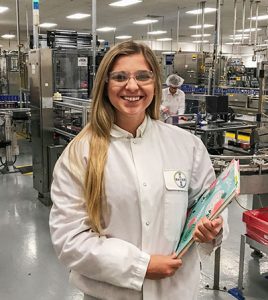 The featured student this week is Holly Robbins, a mechanical engineering major from Cookeville, Tennessee, who worked for Bayer in Cleveland, Tennessee.

During her rotation, Robbins worked on several projects aimed at process improvement and operational excellence. During her first month, she was tasked with the challenge of redesigning one of the manufacturing rooms, where she worked with representatives in quality, safety, line operators, contracted workers, and her team in manufacturing to redesign the process to meet new consumer needs. The project was ultimately successful, and by taking the lead on it she was able to quickly acclimate to the world of manufacturing.

Another project in which she played a major part was an OAE taskforce. As a part of this project, she designed a new OAE Tracker excel spreadsheet which automatically calculates and saves important production information such as line downtime. Upon the success of this project she was asked to duplicate it for all the other manufacturing lines and it is now reviewed at a daily meetings.

When describing the benefits of her co-op, Robbins says, “I think my most valuable benefit of accepting this coop has been my opportunity to network with and learn from engineers working in the field. I have met so many wonderful engineers here who are more than happy to impart wisdom.”